2023 Wasco All Stars-Registration is OPEN

Prior to 2022, we added a Part-Time Travel program, which gave players the ability to play additional games against other Part-Time Travel teams. This program was separate of, and in addition to Wasco All Stars.

Over the years we started to identify some challenges running these two programs concurrently. The most significant concern, being the health and safety of players who played In-House, All Stars and Part-Time Travel; with these 3 seasons overlapping. As much as it’s hard to admit, there is such a thing as “too much baseball” and we were consistently seeing players just playing too many games, oftentimes  in small windows.

Given this concern, and after thorough discussion,  in 2022 we decided to merge Wasco All Stars and our Part-Time Travel program, into the new and improved Wasco All Stars program. This change enabled us to better provide a more positive, developmental and competitive experience for our Wasco All Stars players. Wasco Baseball has fielded very competitive teams in year’s past and we will continue that tradition.

Below are the key points of how the 2023 Wasco All Stars Program will operate:

Please reach out to Carl Deliman with any questions: allstars@wascobaseball.com.

Why should my player consider trying out for a Wasco All Star team? It’s fun!

Past players of the Wasco All Star program have great memories from playing on their respective teams. Wasco Baseball has fielded very competitive teams in year’s past and we will continue that tradition.

For the 8u Kid Pitch team particularly, this is a great opportunity to experience what Travel Baseball is like, without having to make the commitment of a Full-Time Travel player.

What team is my player eligible for??

All Players selected for the Wasco ALL Stars are required to play in a Wasco Baseball Spring In-House league. If you need to register, visit the link below.

Please refer to the table to determine the appropriate age level for your player: 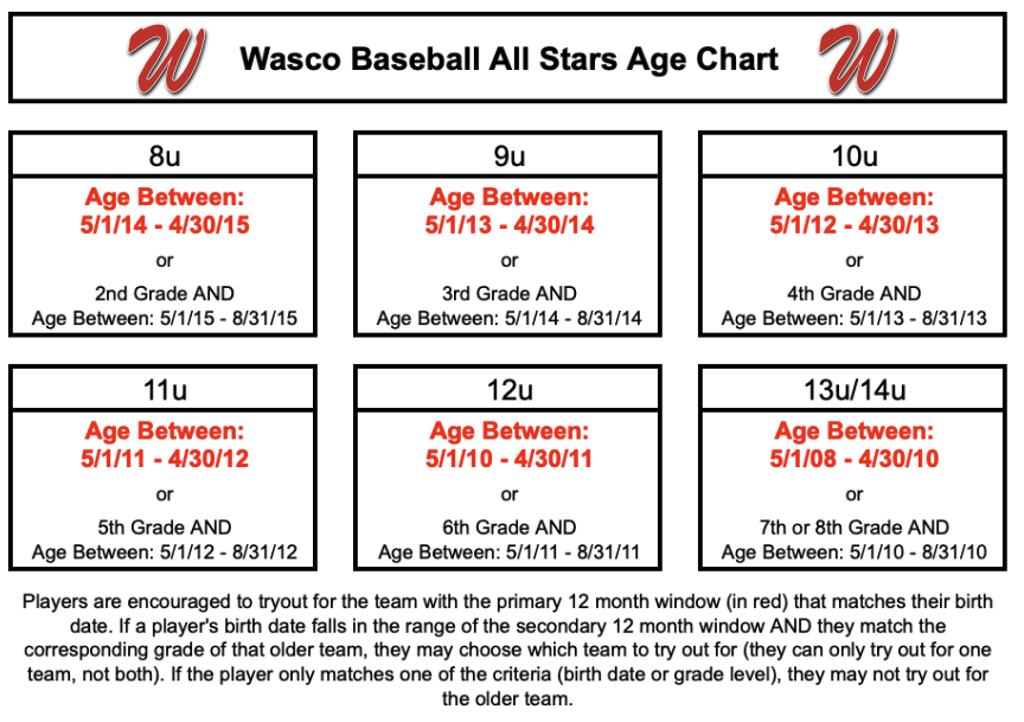 REGISTRATION IS OPEN! Click the blue bar below to register for Tryouts.

No, our All Star program does not allow Play Ups at any level. This includes 7 year-olds who do not fall within the 8u birthday/grade range. Because 7 year olds who are not in the age window and grade will not be considered for the 8u teams, we will not allow them to try out. However, we encourage them to come back out next year!

When and where will the tryouts take place for Wasco All Stars?

Tryouts will take place at Top Pick Athletics in Sugar Grove.  Your tryout time will be assigned at least a week before the tryouts:

8u Coach Pitch tryouts will be later in the season, likely in April/May.

What is the commitment like and how many games can we expect as a parent between the In-House and the All Star Season?

If your child is chosen for the Wasco All Star Team, they will play an estimated 30-35 games between their In-House and All Star Teams. Practices will start in March, and run through the last tournament the team participates in.

The total number of games consists of games from the In-House league, All Star Tournaments, and up to 6 games in the N60 Part-Time Travel league.

How many tournaments will be included in the Wasco All Star Program?

When do practices start, and what days are practices?

There will be 3 indoor practices in March at Top Pick (3/5, 3/12, 3/19). Outdoor practices begin the first week of April on Fridays and/or Sundays.

What is the cost to play Wasco All Stars?

Wasco All Stars (excluding 8u Coach Pitch) will cost somewhere between $200-$300 per player (does not include In-House fees). This includes the tournament fees, umpire costs, field maintenance costs, a hat, game jersey, practice jersey, pants, socks and a belt.

Will my child play Minors if he makes the 8u Kid Pitch All Star team?

Your child will have the option to play in either the Farm or Minor league  if they make the 8u Kid Pitch All Star Team.

What are the details for the 8u Coach Pitch Team?

The coach pitch team will conduct their tryouts in April/May. The team will play around 26 games between their In House team and the All Star Team which will include two tournaments in June or July.

We are now accepting applications for our 2023 All Star Managers.  If you have any questions, or want more details about the responsibilities, please contact Carl Deliman via email at allstars@wascobaseball.com.

Next steps if you have indicated your intent to manage a 2023 All Star team:

Coaches will be elected at the January Board meeting. Results of the voting will be communicated to the candidates the following day.